With assistance from the Maine Fire Service Institute within the Southern Maine Community College, municipalities can access much needed advanced training programs. (See the PDF version) 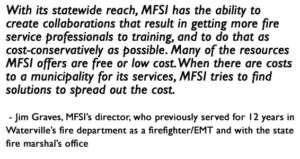 Municipalities often have limited resources to put toward nonmandatory training for their fire departments, but everyone recognizes the value of being trained on more than the basics – especially those who are depending on their fire departments to have the skills to help no matter what the type of emergency.

Currently headquartered on the former naval base campus in Bruns-wick, MFSI got its start (then known as Maine Fire Service Training) in 1958 as part of the state’s Department of Education. Today it is a department within Southern Maine Community College that offers statewide training and education to fire service professionals. It serves as the certifier of the state’s Fire Fighter, Fire Instructor, and Fire Officer programs, and, per state law, is the state representative to the National Fire Academy.

MFSI is funded primarily through the fire insurance premium tax on fire insurance policies and the community college system, but also gets some funding from the state’s general fund and the National Fire Academy, said Jim Graves, MFSI’s director.

“Our role is to provide opportunity to the fire service in collaboration with the state chiefs and other fire service stakeholders,” Graves said. “What we try to do here is offer those opportunities.”

To that end, in addition to professional certifications, MFSI offers a variety of resources to fire service professionals. Most often, resources are trainings, but sometimes “resources” means acting as a sounding board or in an advisory capacity to tackle administrative, policy, or other situations that come up in the course of running a fire department, Graves said.

MFSI is a “big value,” said Tim “TD” Hardy, Farmington’s fire chief, “just because of the assets they bring, both from instructors and training to materials and props that they provide. We can’t necessarily go out and buy all these different props, but the props that we’re able to use and bring up – even for our in-house department training – is a huge benefit to our members’ training.”

“The idea here is to allow your teams to have that experience before they actually have to be in an emergency scenario like that,” Hardy said. “Forceful entry is a big one. Our people don’t force commercial entry doors on a regular basis like some city fire departments might, so we practice that periodically and having that asset to practice with is a huge benefit.”

Being able to work with MFSI has allowed Fryeburg’s fire department, which, like many fire departments has limited staff members and resources, to widen its training footprint, said Andrew Dufresne, that town’s fire chief and emergency management director.

(With MFSI) we were able to really expand that by bringing the entire service to the table.”

When Dufresne was hired as Fryeburg’s fire chief in September 2016, one of the first things he did was to ask the firefighters of the town’s on-call department what the lay of the land was. He repeatedly heard a recurring theme from them and from others related to the fire service: people were eager to get training but there was a gap in training availability.

MFSI’s wide range of available trainings, props and other equipment for training, instruction quality, and classes that lead to professional board certifications have led the department to work with MFSI more and more over the last couple of years, he said.

Writing grants for training for his own department was successful, but grant writing is time-consuming, cumbersome, and is sometimes constraining, Dufresne noted. Being able to work with MFSI has broadened and increased the opportunities for the Fryeburg fire department, its partners, and the region.

“Our relationship with the Maine Fire Service Institute has blossomed,” he said, to where they’re now not just attending trainings but working hand-in-hand with MFSI on planning and implementation of training programs. “They are very talented at the work that they do,” he said. “They bring lots to the table from that perspective.”

Recent training projects Fryeburg has done with MFSI include a fire officer professional development course, a pumps and hydraulics class, and a propane class with classroom and tactical exercises to train for handling propane emergencies.

“Those were just types of classes that would’ve been a lot of effort on our behalf to put together,” he said. “It made it quite easier to bring those folks to the table, as well as their abil-ity to bring others to the table, to train with us.”

With its statewide reach, MFSI has the ability to create collaborations that result in getting more fire service professionals to training, and to do that as cost-conservatively as possible, said Jim Graves, who, before becoming MFSI’s director, served for 12 years in Waterville’s fire department as a firefighter/EMT and with the state fire marshal’s office. Many of the resources MFSI offers are free or low cost. When there are costs to a municipality for its services, MFSI tries to find solutions to spread out the cost, he said.
In Hardy’s experience in arranging trainings for Farmington, partnering with MFSI not only brings MFSI’s expe-rienced instructors in, but also opens opportunities for cost sharing, he said. For recent trainings, costs were shared between Franklin County’s firefighters’ association, each of the towns sending trainees, and MFSI.

While most municipal fire departments look to MFSI for training resources, Graves likes to point out that municipalities can use the professional development opportunities MFSI offers as a retainment and recruiting tool.

In a time when attracting and retaining firefighters, especially on-call volunteers, is particularly tough, being able to offer professional development training opportunities through MFSI can be useful for municipal fire departments. Hardy said that last year,

Farmington sent five people to a training program. For various reasons, two of those trainees are no longer active, but “We’ve ended up with three people that are trained firefighters available to help our town,” he said.

As more employers raise wages and offer perks to entice potential employees and keep the ones they have, municipal fire departments are finding it increasingly difficult to compete with those employers. Municipal fire departments do not have the finances to offer large salaries, Graves said. They can, though, offer through MFSI professional development courses that can lead firefighters to additional sources of income and/or advancements in their careers.

Hardy, for example, took numerous different courses through MFSI, including instructor certification, to expand and broaden his skill set. “A lot of my opportunities have come from instructing,” said Hardy, who, in addition to his role as Farmington’s fire chief, works with MFSI as an instructor. “When you start working in that field, it opens you up to a lot.”

More importantly, from Jim Graves’ perspective, is that the more people that can be recruited to and retained in fire departments, and the more expertise they can get, the better it is for the residents of the state. “We want to pull people into the profession, and we want them to serve their communities because that’s how we were all raised: to serve your community,” he said. “We’re just trying to do what’s right for the people of the state of Maine.” (See the PDF version.)

To learn more about MFSI and see what it offers, go to https://mfsi. me.edu.