The increase is in sharp contrast to a nationwide trend of declining enrollments at two-year public colleges over the last several years. The strong showing is due in part to a number of new initiatives at the colleges aimed at attracting and retaining more students. The system also did not raise tuition for this academic year, maintaining the lowest tuition and fees in New England. 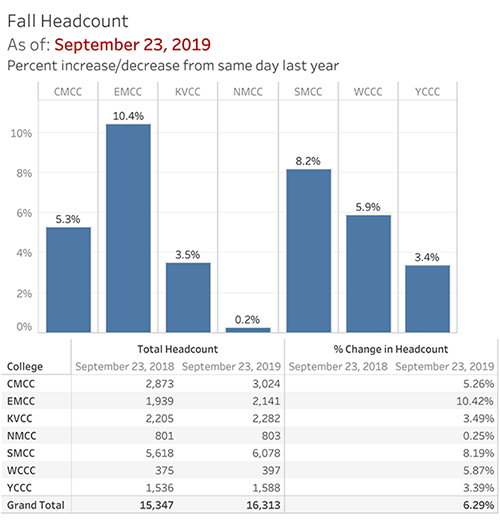 At the same time, the system is also seeing a surge of participation in its short-term job training programs which are not included in the fall headcount enrollment numbers.

In the last year, the number of trainees who completed short-term training programs funded by the MCCS Maine Quality Centers (MQC) program has almost doubled to 1,602, up from 897 in the previous year. MQC works with Maine employers to provide customized training that is free to trainees and is focused on strengthening the skills of the Maine workforce.

“We’re seeing significant growth both in our programs that lead to one-year certificates and two-year degrees and in short-term training,” MCCS President David Daigler told the system’s Board of Trustees at a meeting Wednesday in Bangor. “Demand from both employers and individuals looking to gain the skills needed to compete in this new economy is exploding and stretching our ability to respond.”

The high demand for both degree programs and short-term training at Maine’s community colleges is particularly noteworthy given the state’s record low unemployment, aging demographics and widespread workforce shortages. Community college enrollment has historically been tied to the economy, going up during periods of high unemployment and declining when jobs are plentiful.

Fall enrollment increases have been driven in part by initiatives at campuses across the state. Among the new efforts are: doubling the number of visits to some high schools, replacing group orientations with one-on-one orientation sessions; reaching prospective students through texting instead of email; adding new high-demand programs including plumbing, HVAC and esports; and giving students new online tools to communicate with others to increase peer-to-peer connections.

Enrollment numbers for fall 2019 will be finalized in mid-October.

Maine’s seven community colleges offer nearly 300 degree and certificate options in over 140 occupational fields. More than 75 percent are the only ones of their kind in the state.