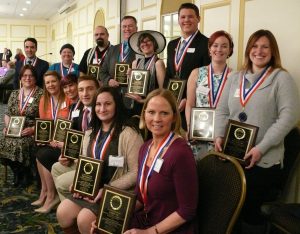 AUGUSTA, ME – Fourteen Maine community college students were named to the All-Maine Academic Team for two-year colleges at a ceremony on Wednesday, March 22, 2017, at 11 a.m., at the Senator Inn in Augusta. The event was hosted by the Maine Community College System Board of Trustees. The students who received the award, which includes a $500 scholarship, are:

YCCC’s Bryanna Smith was also be honored as the Maine Coca-Cola New Century Scholar in recognition of having achieved the highest All-USA Academic Team application score in the state. Smith will represent Maine at the American Association of Community Colleges’ annual convention in April, where she will receive a $2,000 scholarship.